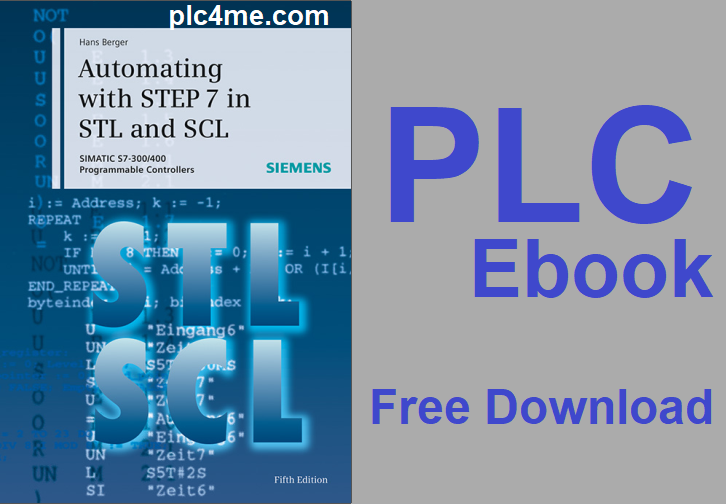 The SIMATIC automation system unites all the subsystems of an automation solution under a uniform system architecture to form a homogeneous whole from the field level right up to process control. This Totally Integrated Automation (TIA) enables integrated configuring and
programming, data management and communications throughout the complete automation system.

As the basic tool for SIMATIC, STEP 7 plays an integrating role in Totally Integrated Automation. STEP 7 is used to configure and program the SIMATIC S7, SIMATIC C7 and SIMATIC WinAC automation systems. Microsoft Windows has been chosen as the operating system to take advantage of the familiar user interface of standard PCs as also used in office environments.

This book describes the STL and SCL programming languages for S7-300/400. As a valuable supplement to the description of the languages,
and following an introduction to the S7-300/ 400 automation system, it provides valuable, practice-oriented information on the basic handling of STEP 7 when configuring, networking and programming SIMATIC PLCs. The
description of the “Basic Functions” of a binary control, such as logic operations or latching/ unlatching functions, makes it particularly easy
for first-time users or users changing from relay contactor controls to become acquainted with STEP 7. The digital functions explain how digital values are combined; for example, basic calculations, comparisons or data type conversion.

The book shows how you can control program processing (program flow) and design structured programs. In addition to the cyclically processed main program, you can also incorporate event-driven program sections as well as influence the behavior of the controller at startup and in the event of errors/faults.

One section of the book is dedicated to the description of the SCL programming language. SCL is especially suitable for programming
complex algorithms or for tasks in the data management area, and it supplements STL towards higher-level programming languages. The book concludes with the description of a program for converting STEP 5 programs to STEP 7 programs, and a general overview of the system functions and the function set for STL and SCL.

The contents of this book describe Version 5.5 of the STEP 7 programming software and Version 5.3 SP5 of the S7-SCL optional package.